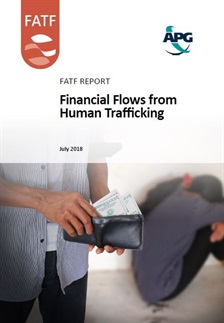 In recent years, the number of victims of human trafficking and migrant smuggling has continued to grow significantly. In addition to the terrible human cost, the estimated proceeds that human trafficking generates have increased from USD 32 billion to over USD 150 billion since the FATF produced a comprehensive report on the laundering of the proceeds of these crimes in 2011. Since then, there is also a better understanding of how and where human trafficking is taking place, including the increasing prevalence of people being trafficked in the same jurisdiction or region.

As human trafficking can happen in any jurisdiction, it is important that jurisdictions assess how they are at risk of human trafficking and the laundering of the proceeds of this crime, share this information with stakeholders and make sure that it is understood. Jurisdictions should also build partnerships between public sector, private sector, civil society and non-profit communities to leverage expertise, capabilities and partnership. The private sector, and financial institutions in particular, are on the frontline.

Non-profit organisations also play a crucial role in tackling human trafficking and the financial flows that derive from it. In addition to the support to the victims of this crime, they can also ensure that essential information, including on who is profiting from the trafficking, reaches financial institutions and authorities as victims are often fearful of reaching out to the authorities themselves.

Innovative initiatives at the national or regional level have demonstrated how anti-money laundering and counter-terrorist financing measures, and those that implement them, can contribute to stopping this crime. However, globally, there has not been sufficient focus on how to use financial information to detect, disrupt and dismantle human trafficking networks. This report provides good practices (see Part three) to help jurisdictions develop measures to address money laundering and terrorist financing from human trafficking and includes red flag indicators (see Annex B) to help identify those who are laundering the proceeds of these heinous crimes.

The FATF and APG acknowledges the support of several financial institutions and associations (Barclays, Standard Chartered, HSBC, Western Union, Ria Financial, the Wolfsberg Group, European and American Bankers’ Alliances and the Mekong Club,) and NGOs (Liberty Asia and Stop the Traffik) in developing this report.